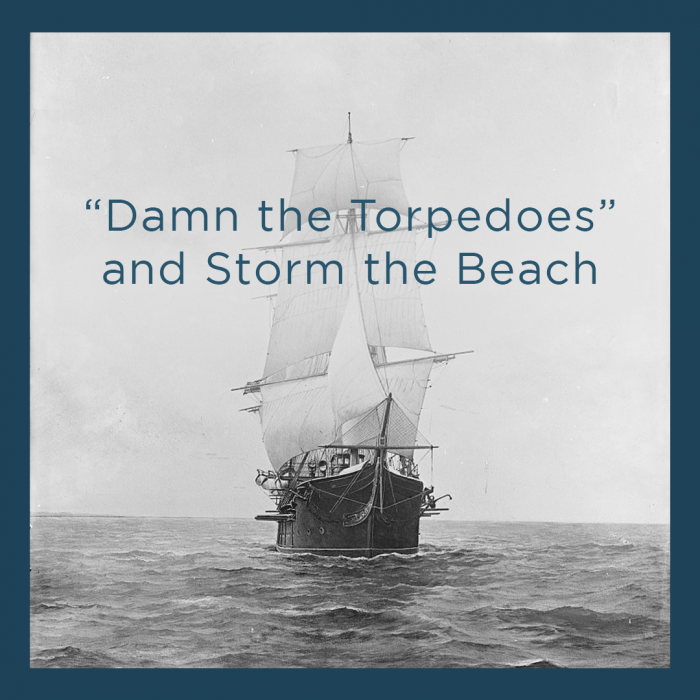 I’ll have to admit, it did seem strange praying, “Damn the torpedoes, God!” I’ve certainly never prayed that one before, much less while sitting on the steps of the Supreme Court. That’s not all, however—now I’m asking you to agree in prayer with me!

It began with a dream given to my friend, Ken Malone:

thunderstorm just off shore in the Atlantic Ocean. In the dream, a spiritual daughter of mine was working in the cafeteria of the Supreme Court. Chief Justice John Roberts approached her and made the following request, “Tell

Ken Malone our positions are being overrun. I need his help.”

My “daughter” relayed the request and I responded, “Damn the torpedoes. Tell him we’re coming.”

“Damn the torpedoes” was a phrase used by Admiral David Farragut, during the battle of Mobile Bay, August 5,1864. The statement, of course, was made in reference to the fierceness of the battle and Farragut’s determined refusal to retreat. The ensuing Union victory was significant in winning the war, and also a great boost in Abraham Lincoln’s bid for re-election three months later. As you will see momentarily, Holy Spirit would give us a different twist on these words.

In response to the dream, Ken, three other intercessors and I immediately planned a prayer journey to DC on August 4-5, the anniversary of Farragut’s declaration. The prayer times ended up being incredibly strategic and Holy Spirit’s direct involvement and encouragement began before we even arrived.

In response to this, we engaged in 3 hours of powerful prayer outside the White House on Tuesday night, August 4th, declaring God’s kingdom rule over America and the coming elections. We prayed much for President Trump. Holy Spirit led us in our prayers very strategically. We then partook of communion as a part of our intercession, asking for God‘s covenantal mercy to our nation.

The following morning, August 5, the anniversary of Farragut’s decree, we went to pray at the Supreme Court…and God surprised us by sending reinforcements. While sitting on the steps, our friend, Matt Lockett, leader of the Justice House of Prayer, approached. He had no idea we were there! Matt’s calling for ten years has been to lead daily prayer for the Supreme Court, and because of his obedience and thousands of hours of prayer, Matt walks in tremendous authority regarding the Court. Believe me when I say we had a very strong and insightful prayer time!

Obviously, I am sharing this report to encourage you. There is, however, an even more important reason for releasing it: I’m asking you to pray.

The war for our America’s health and destiny has reached its Normandy. Either we storm the beach and experience one of our greatest breakthroughs ever, or we falter and endure one of our greatest defeats. We are in a rare and perilous time when a stalemate is not possible; there will be a winner. The war of which I speak is over the direction of the Supreme Court.

Far left, activist judges have controlled the High Court for 60 years. And please believe me when I say, no entity has opened the door to more devastation and destruction in America than the Supreme Court: sixty million aborted babies (did you get that—60 million?!); the removal of Yahweh’s influence from government and schools; the redefining of God’s most sacred institution, marriage; girls must now share showers with boys at school; and so much more. If the insanity isn’t stopped soon, polygamy will be next, followed by people marrying animals. The violence, crime, poverty, disease, family decay, addiction, deception and other evils we have reaped from their decisions are devastating beyond belief. One governor recently announced that it is ok to kill babies surviving abortions—after “making them comfortable,” of course. Yours and my tax dollars still fund an organization that murders babies, then sells their body parts. Members of Congress defend, laud and support these heinous behaviors. It seems that much of America has gone mad! And the Supreme Court opened the door to this hell.

However, after decades of work and prayer, we have finally reached a point where the Court can be turned, and reversals can begin! Holy Spirit’s word to us while in DC was very clear: we can now “roll back time,” reverse demonic gains and “damn torpedoes” fired by Satan! This IS the season in which a divine reset is possible. I am appealing to you, please pray faithfully, fervently, and boldly for the continued shifting of the Court.

This branch of our government now hangs in a precarious 5/4 balance—sometimes tilting to the left, sometimes the right. The next President will end this seesaw. He will appoint—and the Senate will confirm—1 to 3 new Justices. This means that whoever wins this presidential election will determine the direction of the Court for the next 30-40 years. This election will either move us fully once more into an anti-Christian, anti-biblical, Constitution-dishonoring, majority on the bench; or will finally shift the Court to a pro-Constitutional, God-honoring solid majority. It cannot be overstated:  WE MUST HAVE A PRESIDENT FOR FOUR MORE YEARS WHO WILL APPOINT CONSERVATIVE JUDGES! No decision made in our lifetimes will be more consequential than who we elect as president this November. Please pray for God’s will to be done in the upcoming elections and pray for the Supreme Court to fully shift. Nothing, absolutely nothing, is more important to the healing and restoration of America.

In the last election, 52 million evangelical Christians stayed home. Heaven must weep over facts such as this. If we all showed up and voted our biblical values, we could turn America around overnight. Pray that God awakens the sleeping giant, the Church!

Don’t grow weary now, praying Christian. This can be our finest hour. Let’s seize the moment!